Bring Your #Valentine to the International Music Festival 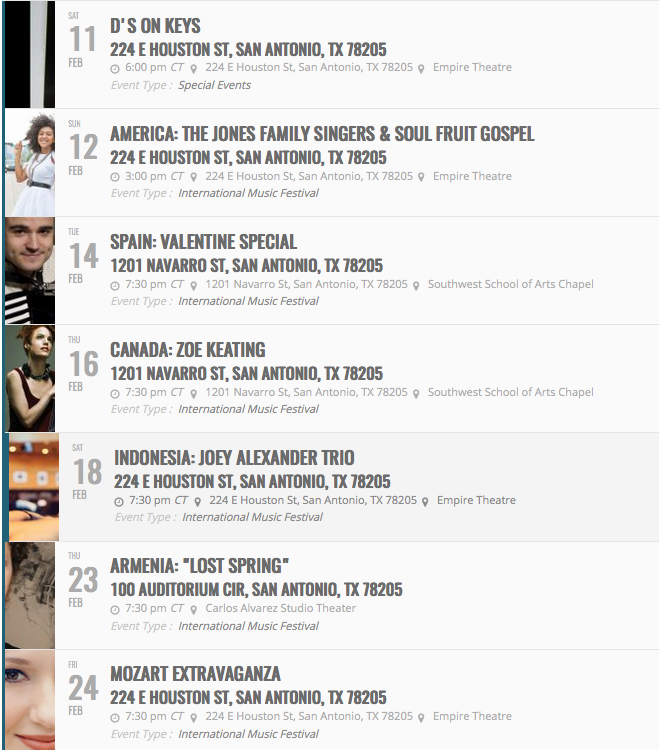 Did you wait until the last minute to book something special for your Valentine’s date night?  Let Musical Bridges come to the rescue with their International Music Festival!

The Alamo City will be treated to a melting pot of music when Musical Bridges Around the World presents its fourth International Music Festival from February 12-26 at venues across the city, including the Tobin Center. The 2017 festival will present five large-venue concerts and three smaller ones featuring musicians and and performers from Indonesia, Spain, Armenia, Cuba, Argentina and Canada.

We can’t resist the hype on accordion player Victor Prieto’s Valentine Special concert, which promises that he uses the squeezebox in a fresh, jazzy way.  There will also be a special performance by Grammy-nominated jazz artist Joey Alexander on February 18 at the Empire Theater, and dance fans may want to check out tango night with JP Jofre’s Hard Tango Band. For those with tweens or teens interested in cutting-edge music, try cellist Zoe Keating, who uses a foot-controlled laptop to create complex compositions onstage.

Although the performances are free and admission is on a first-come, first-serve basis, avoid disappointment and reserve seating for $60 for five concerts or $100 for eight concerts while supporting Musical Bridges’ programs. Click on Musical Bridges International Music Festival 2017 for more information and to purchase tickets.

Check out musicalbridges.com for a complete calendar.

Related Articles
Community Mail Look Suspicious? Here’s What the FBI Recommends:
Community Add Some Pumpkin (Patch) Spice to Your Weekend Rain, rain…go away!  Ready to turn off the TV, crawl out of your Snuggie, and get outside to enjoy some of the cooler, drier weather in the forecast?  Check out these pumpkin patches, corn mazes and special events in and around San Antonio to put some actual spice in your fall weekend. Devine Acres Farm […]
Community Five Family-Friendly Easter Events Around San Antonio Check out these five “egg-cellent” events over the next two weekends for some family-friendly Easter-themed fun.   Children’s Easter Egg Hunt This Saturday, March 24th at 11 am, the Alley on Bitters welcomes children of all ages to their epic Easter egg hunt. Hundreds of eggs filled with treats will be hidden on their back […]