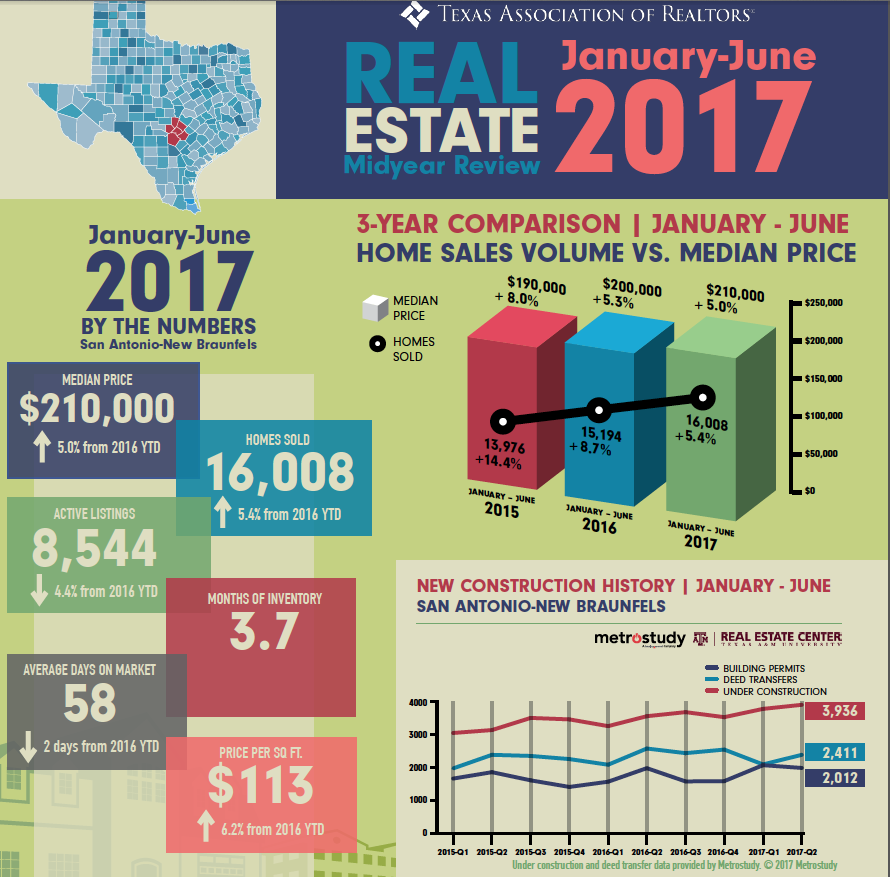 Texas home sales volume, home prices and listing activity experienced strong gains in the first half of the year, according to the Texas Association of REALTORS® 2017 Texas Real Estate Midyear Report.  San Antonio was no exception, as we saw median prices slide up 5 percent and price-per-square-foot increase 6.2 percent over 2016.  But Hurricane Harvey, and the massive devastation left in its wake, will have an incredible influence over the next six months–and beyond. Most of us have friends or relatives who are now dealing with their losses from flooding and gale-force winds, and the challenges they are facing in rebuilding are enormous. Those affected will have to make the decision about whether to rebuild or try to sell and move, and either option comes with both a human and economic pricetag. Businesses from “Mom and Pop” operations to blue-chip companies will need to make the same determination.  I have already seen buyers from Houston taking a look at relocating to San Antonio, and I also think area developers will face shortages of skilled workers (already in short supply), such as electricians and masons, as Houston and the coastal areas rebuild. Though we were spared the direct effects of Harvey’s wrath here, we will certainly see the ripples from it in our market for some time to come.

Jim Gaines, Ph.D., chief economist with the Real Estate Center at Texas A&M University, cautioned that Hurricane Harvey will likely negatively impact housing market statistics for some time to come. “Houston’s housing market accounts for roughly 25 percent of the Texas housing market,” said Gaines, “and it could take months before the Houston area begins to enter the recovery phase and a few years before the impacted communities fully recover.”

Related Articles
Real Estate Homes in North Central San Antonio Want to love where you live?  North Central San Antonio offers the “triple crown” of established communities, excellent school districts and upscale urban amenities–all with a Hill Country vibe.  Subdivisions include the amenity-packed, family-friendly neighborhoods of Inwood, the Vineyards, and Rogers Ranch plus acreage communities like Hill Country Village, Shavano and Hollywood Park.  On the […]
Real Estate Market Favors Sellers in February We are shaking off the winter doldrums here in the Alamo City, and it seems like the real estate market is following suit.  Buyers continued to find properties to call home in February, with a three percent year-over-year increase in sales for a total of 2,012 homes sold, according to the Multiple Listing Service Report […]
Real Estate Avoid Being Scammed During Your Next Real Estate Transaction Technology has changed the way we buy and sell houses. From sites that display millions of listings to sensitive transaction documents sent through email, the internet has made buying and selling a home easier than ever. But all of that personal information floating out in cyberspace, along with the large sums of money that real […]